• Biosyent licenses and markets specialty pharmaceutical products in Canada
• They stick to proven, approved drugs and risk no money trying to create their own.
• We first got into Biosyent at $1.20 in May of last year after we became convinced the CEO was top-notch and could grow the business 50+% per year.
• The company delivered quarter after quarter and became a “must own” for small-cap funds in Canada.
• The stock has risen over 800% from our original purchase and the business shows no signs of slowing down – Biosyent’s chart really is a thing of beauty. 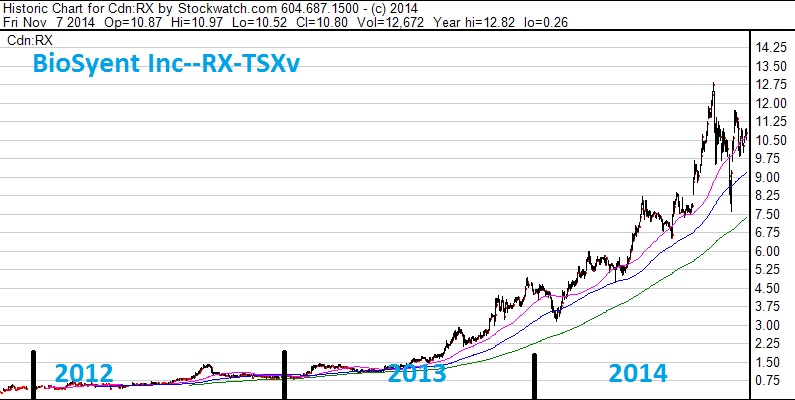 • Microbix manufacturers strains of viruses (Dengue fever, Rhubella, etc) for disease testing kits
• They also have three technologies, including LumiSort, a new process engineering animal semen for a particular sex – i.e. a dairy farmer could be guaranteed all female offspring
• We found Microbix when it was under $.20 after a decent and profitable quarter – the market believed it would’t keep making money and was jittery about a lawsuit overhang.
• Late January brought us lots of good news: MBX won their lawsuit, kept making money, and raised cash to make LumiSort a reality. The stock went up 250% in a matter of days.
• With an update on LumiSort due out in two weeks, insiders have been buying and so have we – the stock is now up almost 300% from our first purchase. 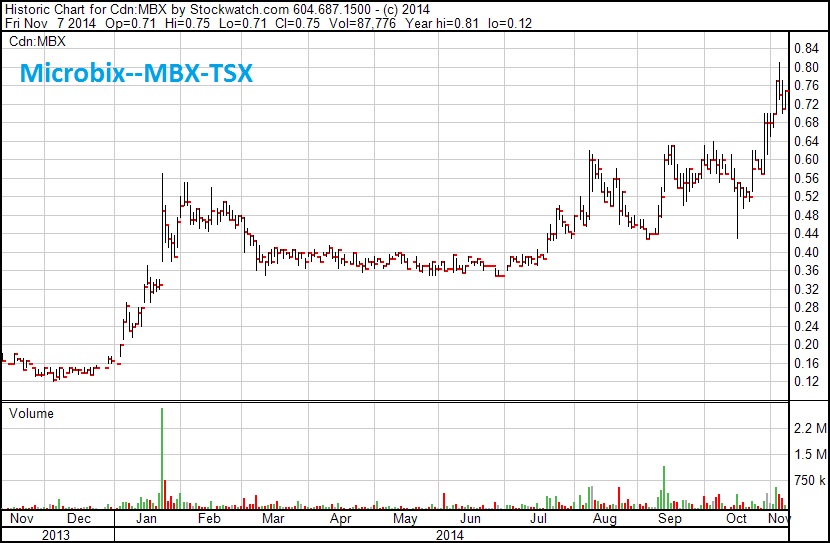 • Covalon makes anti-bacterial wound care products, such as films for the skin and IV coatings
• The company’s products provide a comfortable covering for the patient and help prevent infections while they receive care.
• We thought Covalon might be toast in August last year with the stock at $.14 and the company running out of cash – until they delivered a blow out quarter of $0.03 per share in earnings and we saw insiders buy a big chunk of the stock.
• We began buying and just two months later, Covalon announced a major licensing deal with Molnycke, the $3B leader in the wound care space.
• COV’s growth has been impressive until hitting a snag this last quarter – the stock is down big, but still over 8X our original purchase price. 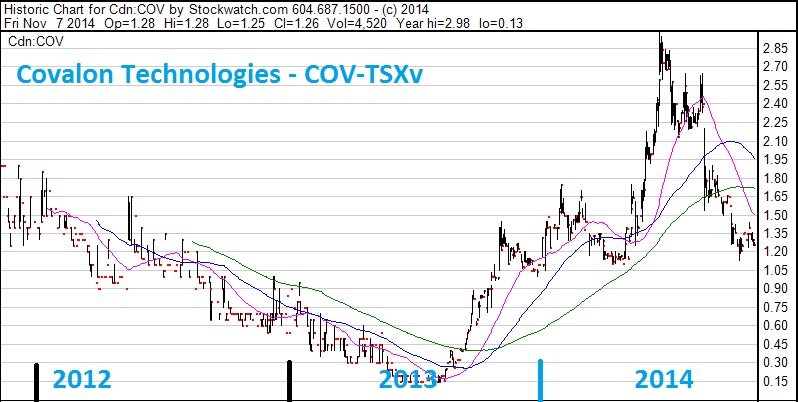 • Avante Logixx provides high-end security services for families and businesses in Toronto
• They offer services like responding to homes after a break-in (guaranteed in 6 minutes of less!) or accompanying corporate executives on a product launch event in Africa.
• We first bought Avante at $.10 in 2013 after a strong quarter and noticed a respected Toronto business man had come on board to engineer a turnaround and was buying stock
• The new CEO cut costs, drove growth, and brought the stock to life – it hit at high of $.45 in February of this year and they were able to raise $5M from institutions to go after acquisitions.
• These institutions headed for the exits following a soft quarter in July, but Avante is still up over 2.5X our entry price. And with $6M in cash on hand for acquisitions, we still like this one. 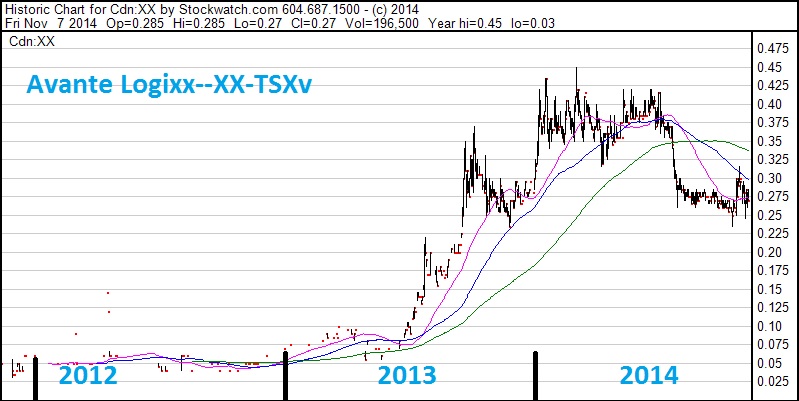 • NTG Clarity Networks makes software for telecommunication companies.
• Their solutions help telecoms manage all parts of the business – orders, inventory, billings, etc.
• We got into NCI under $.10 in May of last year because they were experiencing huge growth abroad and trading at an absurd multiple – under 4X earnings.
• The stock flew to $.60 after the CEO set lofty targets for growth. We went cautious and took most of our position off the table.
• Miss after miss, the market lost faith in management – the stock has broken down and we can’t get comfortable with NCI again. 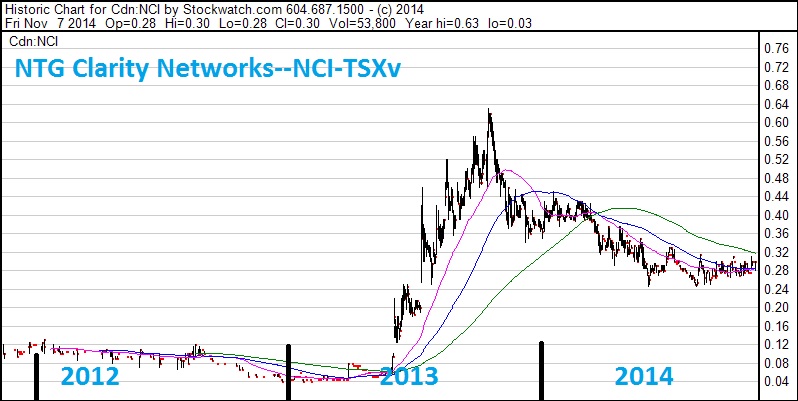 • Sangoma makes technologies that allow all devices in business to communicate together – computers, phones, iPads – you name it.
• A shift from phone to internet communication nearly killed Sangoma – they had to spend the last three years engineering 50+ new products to stay alive.
• We first got into Sangoma earlier this year at $.28 because it was cheap, loaded with cash, and growing fast (30+%).
• What we missed is that all the growth from new products was soon to be negated by declines in their legacy business
• We admitted we were wrong and exited after growth stalled, the stock moved sideways 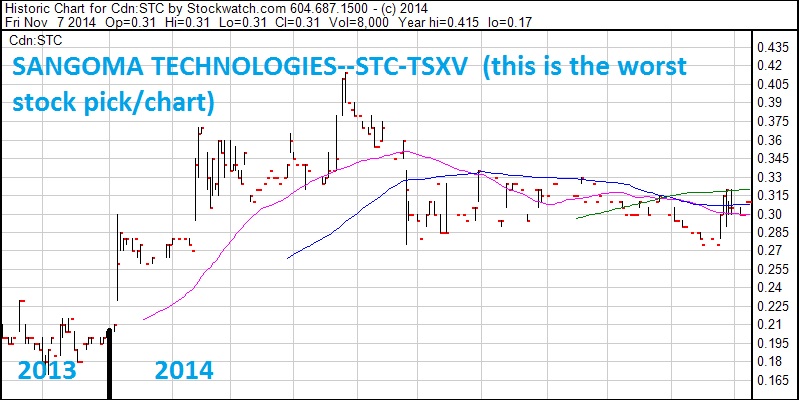