How to Profit Investing in the Software-as-a-Service Space

We are generally industry-agnostic when picking stocks at Smallcap Discoveries. We will look at anything except resource stocks.

It’s interesting to us however that one industry produces more companies in our sweet spot that just about any other. It’s the Software-as-a-Service (SaaS) space.

These companies have exactly what the market craves: recurring revenues, high margins, and almost unlimited scalability. They can command some of the highest valuations in the market. We’ve seen some huge winners in the space over the last few years.

What excites us is this industry is going through a massive change. Many traditional software companies are transitioning to a SaaS model. The switch temporarily disrupts the numbers — but it creates some great opportunities for investors who understand the space.

Well today we are pleased to introduce an SCD-exclusive 3-part series on investing and profiting in the SaaS space. And we’ve done it in collaboration with two of our good friends from the smallcap world: Philippe Belanger and Aaron Lanni.

Philippe and Aaron write a smallcap-focused blog, Espace Microcaps, and are pretty darn good at what they do. Philippe was recently profiled in MoneySense for growing his TFSA to over $100,000. He’s done it exclusively with smallcap investing.

We’ve known these two for a few years now and had a lot of fun collaborating with them on this series.

Part I – SaaS Overview: What it is, how it differs from traditional software deployment, and how these companies are valued.

Part II – SaaS in the Smallcap Space: The unique challenges and massive opportunities in smallcap SaaS companies. An exclusive interview with the CEO of one SaaS smallcap that is becoming a rising star in the space.

Part III – SaaS Metrics & Investment Strategies: We boil it down to the key metrics you need to know and what you need to see to position yourself for profits.

So we invite you to read on as we go through the SaaS industry and explain exactly what you need to know to profit in this exciting space.

Part I: Investing in SaaS Companies

We’re starting with the basics in Part I of our SaaS investing series. We’ll be talking what SaaS is and how it’s disrupting traditional software delivery. We’ll finish with some of the key advantages of SaaS and why it’s getting a premium valuation in the market.

The SaaS model is a method of selling centrally-hosted software on a subscription basis. It has been called “on-demand” software and allows clients to access the software via a web browser. Hosting software off-premise has often been referred to as cloud computing.

Cloud computing allows you to access programs over the internet instead of on your hard drive. Online banking and e-mail are common examples.

To illustrate the advantages of cloud technology, let’s first look at how software is traditionally delivered using the ‘’on-premise” model:

The vendor also requires annual maintenance contracts to cover support, updates, and patches. These contracts are typically priced at 15-22% of the initial license cost.

On-premise software is usually more customizable but the more you customize, the more it will cost you in upgrades. Implementation and integration can be lengthy and costly but the client has more control over the systems and data.

Now let’s take a look at how cloud technology paved the way for the new model called “Software-as-a-Service” (SaaS):

Cloud computing can be seen as a stack of three elements: 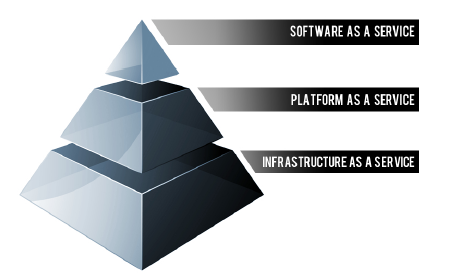 Here is another way of looking at the stack and comparing it to on-premise software (far left): 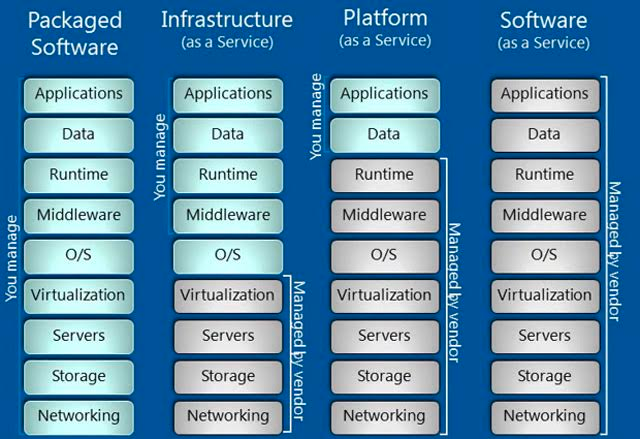 In the SaaS model, the software vendor hosts and maintains the server, databases, and code that make up the application. The buyer is outsourcing all hardware and troubleshooting to the vendor.

Benefits of the SaaS Model

SaaS comes with many benefits compared to on-premise software. Here are just a few:

The software is already configured and installed, allowing for a quicker deployment as you hire new staff. Many SaaS vendors also offer free trials of the software so you can test it before buying. 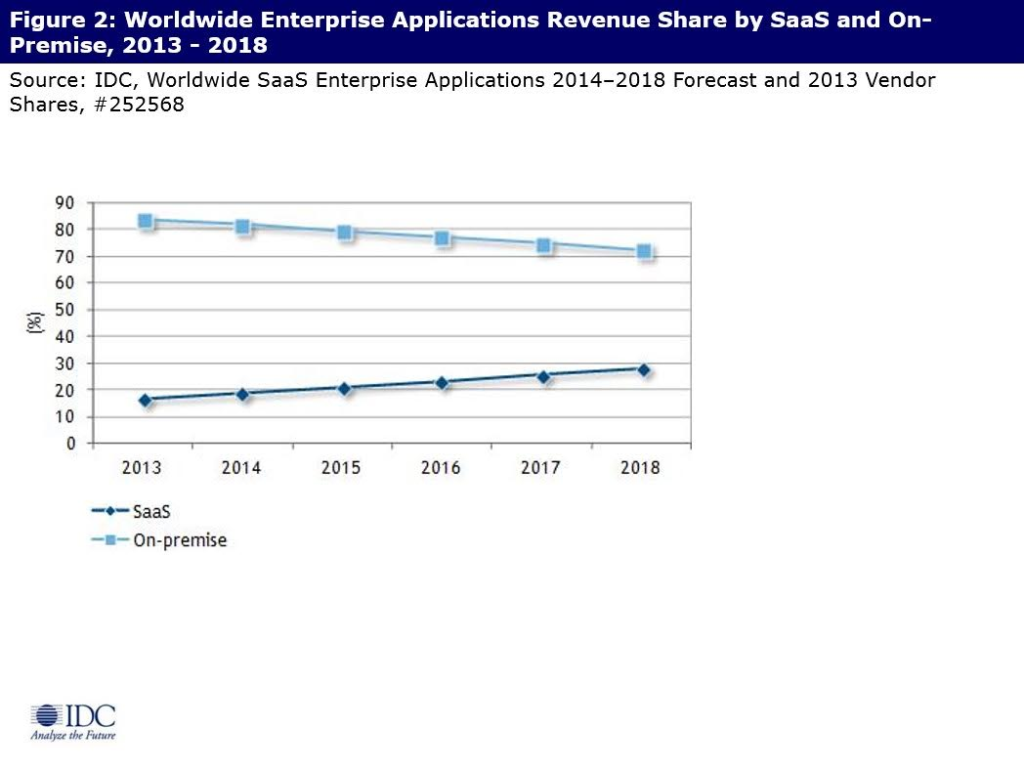 Few industries are growing at double-digit rates and these projections put the SaaS industry at one of the fastest growing we’re aware of.

Now we’ll look at some valuation metrics — and understand why SaaS companies are trading at a large premium to their on-premise peers.

The Software Equity Group provides free research on software companies. They follow an index of 141 public companies that offer on-premise software on a perpetual license model with annual maintenance and service contracts.

Here are the median valuation metrics for that index: 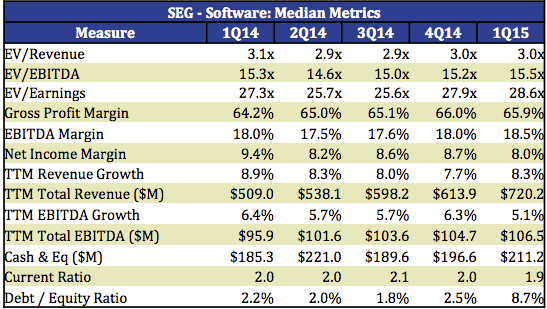 The Software Equity Group also tracks an index of 52 publicly traded pure-play SaaS companies. Here are the median metrics for that index: 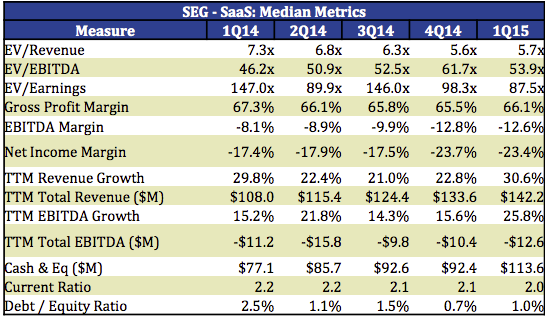 What really stands out is the median EV/Revenue multiple for traditional software companies is about half the multiple of SaaS companies. Here are the three primary reasons:

To see the correlation between growth and valuation, Intercom studied a few SaaS companies: 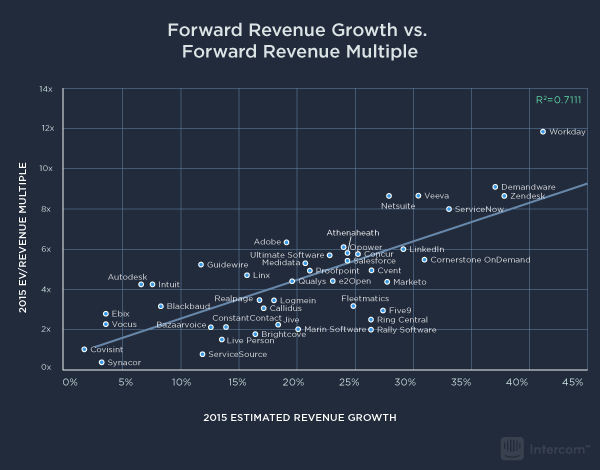 In addition, here is the distribution of growth rates compared to EV/Revenue for the SEG SaaS Index: 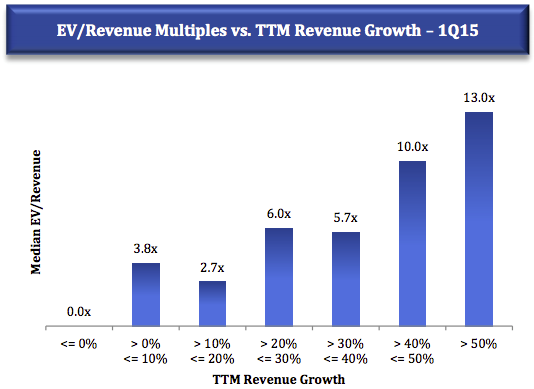 It’s very simple for these companies: the higher the growth, the greater the valuation.

The SaaS model is disrupting the software industry and serving up big profits to investors riding this wave.

And investors love SaaS because of their:

So put it all together — and you get valuations for SaaS companies over 2X that of traditional software companies.

But investing in SaaS companies comes with its own challenges. Almost 55% are unprofitable and most require 4-5 years to reach profitability. This can be especially challenging for the smallcaps we focus on.

In Part II of our SaaS series, we’ll focus on the challenges facing smallcap SaaS companies — and the enormous opportunities this space brings investors. We’ll also get an exclusive CEO interview from one smallcap SaaS company that is making a splash in the industry.