We wrote this case study on Pioneering Technologies for our good friends over at the Espace Microcaps Blog. Today we are telling the story of how we found it — and how it became our second biggest winner ever. Enjoy.

But fast forward to March 2016. It had been almost a year since our last investable idea — Lite Access. Our patience was growing thin.

It was then we began looking at a tiny company out of Ontario, Canada, Pioneering Technologies (PTE.V / PTEFF:PINK). Pioneering was no stranger to us. We’d owned the stock in the past. But they couldn’t deliver the consistent results we needed to see.

We heard they were doing a private placement and decided to take another look.This time we said was different. Those are dangerous words in investing.

PTE had grown revenues three quarters in a row. Product demand was there. And if they could raise a few million bucks, management claimed they would deliver on some even bigger orders.

We decided to take a significant position through the private placement at $0.125. Fast forward to today. PTE trades at $1.15, up 820% in 11 months. It’s been a wild ride as you can see from chart: 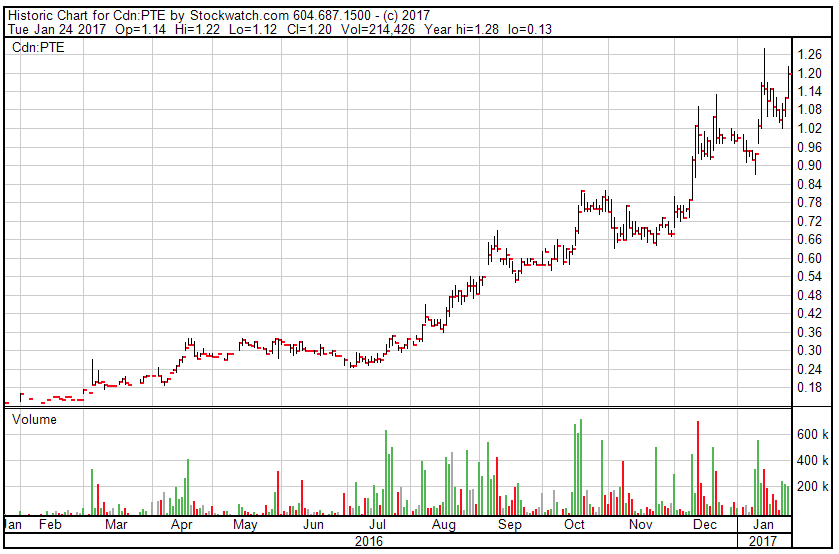 What we saw in PTE — and how it became one of our biggest winners of all time — is the subject of today’s guest post.

What do these guys do? They make stove-top burners that prevent cooking fires. That’s it. It’s as simple of a business as you’ll find. Here’s a picture of it: 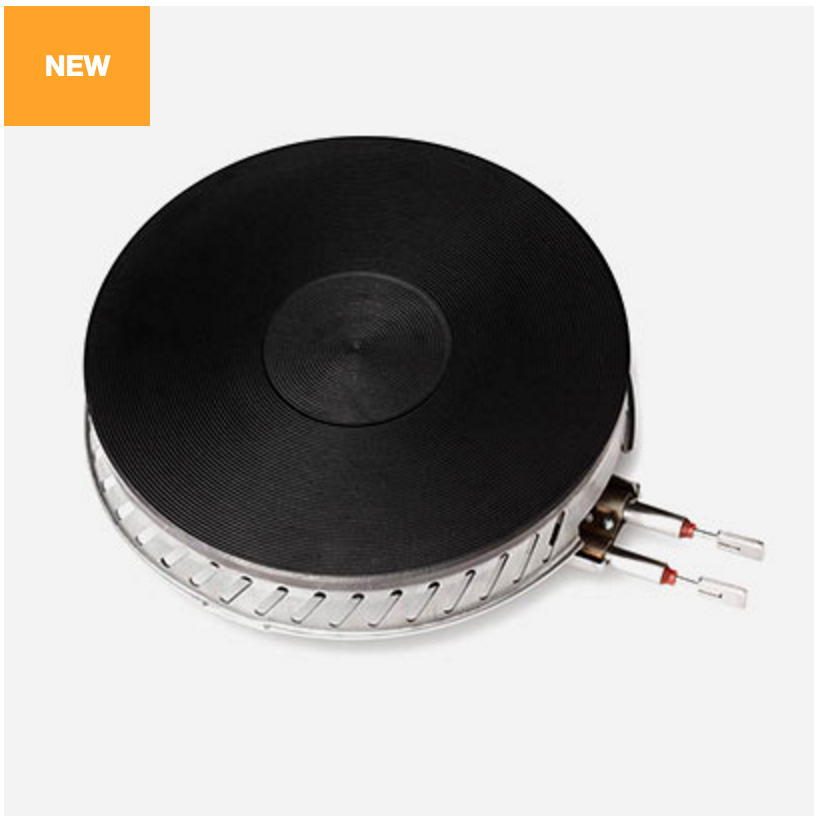 PTE had a simple solution to a BIG problem. Each year, the U.S. endures 570 deaths, 5,430 injuries, and $1.1 billion in property damage. All because of a preventable problem: cooking fires.

And for institutional buyers to get their other friends to buy, they need to be able to tell the story. A simple, yet sexy, story is key.

Now a story is a good start — but it’s not enough to make an investable idea. The numbers have to be there too. Here’s what we saw in our analysis from March: 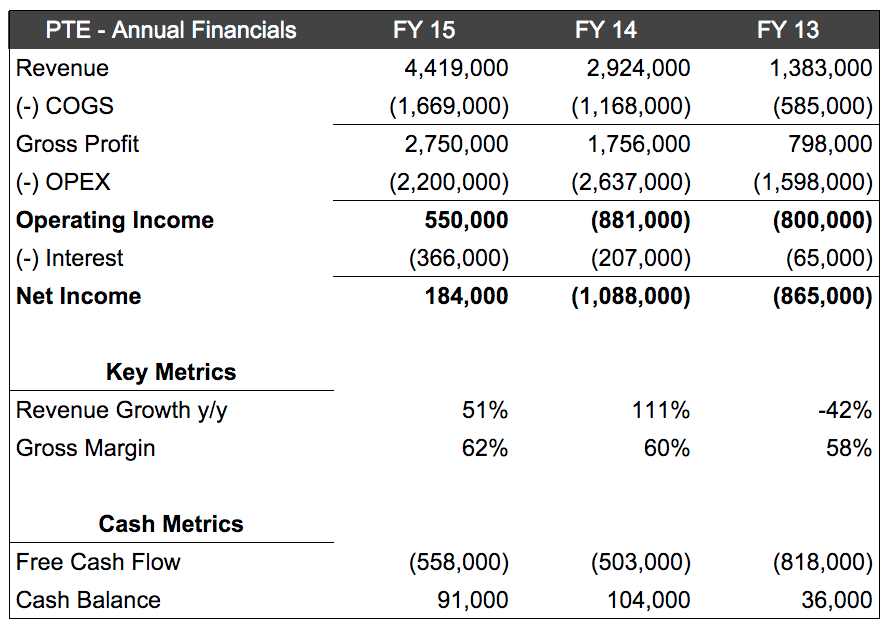 If we could only know two things, it would be revenue growth and gross margin. A gross margin over 50% tells you the company has pricing power. Perhaps they have a strong brand or little competition.

For PTE we found it was both — they virtually created this market and were the only game in town. Their products have been installed on over 140,000 stovetops without a single fire. No new entrant could say that.

We use simple criteria at SCD: 25%+ revenue growth year-over-year, gross margins over 50%, and profitable operations. Pioneering passed all three with flying colors.

So we had a simple company and simple story. It was growing, profitable, and had strong margins. The business checked all the boxes. Next it was time to investigate PTE the stock.

You can do all the due diligence in the world but insiders will always know more than you. That’s why it’s vital to ensure management’s interests are aligned with your own
.
We want to see management own multiples of their salary in stock. And we especially like to see insiders buy stock with their own money.

We pulled up the Management Information Circular for PTE. CEO Kevin Callahan owned 8.5% of the company. Insiders owned 33.1% as a whole including one director who owned 20.9%. This looked ideal to us — strong ownership but not too much that shareholders could get taken advantage of.

PTE was doing a major financing at the time. Management was out telling investors if they could raise money, massive growth opportunities lie ahead. If this was true,
management should have their check books out alongside investors. And that’s exactly what happened.

We expected significant insider participation. After the financing closed, we checked Sedi website for details (you can also use Canadianinsider.com to get this information) and put together this analysis:

Insider ended up taking close to 10% of the total financing. They invested $150,000 of their own money. They increased their holdings 31% on average. These were all very bullish signs.

The final — and often most important — piece to the puzzle is valuation. We’re big believers you make your money on the way in. Pay bargain prices for a solid company today — and hope it becomes the overpriced darling of tomorrow.

PTE traded for 15X trailing earnings at time. This was a reasonable, if not cheap valuation, for a company with their growth metrics. But the more we dug in, the more this company looked like a steal. Here’s what we saw in the quarterly financials from SEDAR:

The numbers were telling us PTE’s business was accelerating. Revenues seemed to have stabilized north of $1.2 million. And so we thought a valuation based on annualized Q1 results made more sense.

Notice the interest expense in table above. Over 25% of PTE’s operating income was going out the door to debt holders. Surely, we thought, a high-growth company that was now profitable could use equity to take out that toxic debt. Management agreed. They cited debt as a top reason for raising money in their Q1 MD&A:

“Pioneering has historically funded its working capital requirements through a combination of cash flow generated by operations and debt and equity financing. The cost of debt financing as Pioneering has been growing has been expensive.”
PTE disclosed in their statements a $250,000 facility guaranteed by their largest shareholder — and they were paying 25% compounded monthly for the guarantee. They also had a $400,000 short-term loan payable to the same shareholder with interest at 25% per year. That was some expensive debt!

We estimated PTE would save $40,000 per quarter in interest alone. And when we combined these savings with our annualized valuation, we saw PTE trading at 4X earnings. It now looked dirt cheap, but you had to dig to see it.

The investment seemed like the classic “heads we win, tails we don’t lose much.” Management could come nowhere near hitting their 50% revenue growth target and at worst we’d likely break even.

PTE checked all the boxes. And so in March we made a significant investment into the company. But the exciting part was only just beginning.

It’s been said the hardest part of multibaggers isn’t finding them — it’s holding on to them. It can be a rocky ride to the top. Here’s how things unfolded over the past year:

● August 17th, 2016: Middle Oak, a multifamily residential insurer, announces a 7% premium discount for all customers who install PTE’s Smart Burners on their properties (When your product pays for itself with insurance savings alone, that bodes well for future sales).

● September 6th, 2016: PTE announces the largest order in company history to a leading North American Hotel Chain. The order is for 8,800 units, or ~$1.6 million, and covers 20% of the hotel’s portfolio. The market begins to speculate about PTE capturing the other 80% of their properties.

And what were insiders doing over this time? At least one of them was buying hand over fist:

Peter Lynch likes to say insiders sell for all sorts of reasons — but they only buy for one. And when those purchases are made at multiples of your buy price, that’s a great sign.

Deep value combined with business momentum is the fastest path we know of to multibagger success. As the stock approached $1.00, PTE’s market cap crossed $50 million. That’s an important threshold as it’s no longer a “penny stock.” Many institutions can now own it.

You see many growth funds are measured relative to their peers. And if one of your competitors owns a hot growth stock, you’ve got to own it — or risk falling behind. This competitive game can make for big gains on high volume. That’s what we’ve likely seen recently with PTE.

We’ve trimmed our position into recent strength but still hold almost every share we bought in the private placement. Management is guiding for another year of 50% year of revenue growth. Regulation is due out this year that requires ALL new cooking appliances to use fire prevention technology in 2018.

We have invested in a number of companies that have similar characteristics as Pioneering Technologies did at early stages. We invite you to discover these companies — and our process behind finding them — at www.smallcapdiscoveries.com