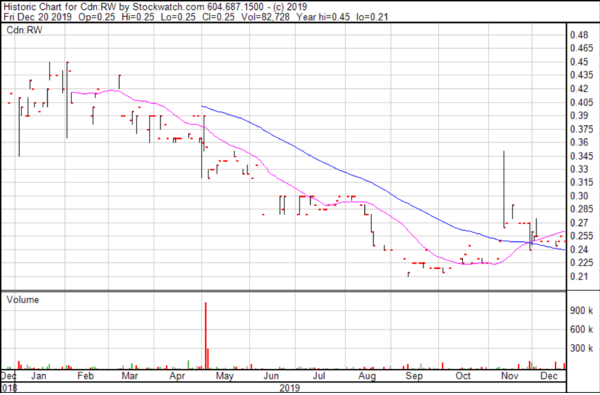 If you recall, Renoworks makes visualization technology for the home remodeling industry. Their tech lets homeowners visually preview products on a digital rendering of their home.

This is a company that’s fallen off the radar for many investors, and perhaps rightfully so.

We feel that many investors aren’t interested in the business because it’s currently not meeting expectations, including two of our key metrics:

Adding to the challenge, like most of the stocks we own or follow, the boom and bust cycle of the marijuana sector has distorted liquidity for microcap growth and value businesses. The resulting outcome is the TSX Venture is down roughly 48% over the past 2 years, and Renoworks’ stock has dropped nearly 40% from its high earlier this year, albeit on relatively low volume.

With microcap value and GARP (growth at a reasonable price) investors not seeing immediate profits and increasing sales, in conjunction with a company that’s too small for institutional support, who’s left buying the shares?

We can tell you who, the insiders are.

Robert Schulz, one of Renoworks independent director’s, has been steadily increasing his position. Since July 2019, Robert has added $100,985 worth of stock between $0.22 and $0.30. His total position is 4,122,666 shares. The last time we recall seeing Mr. Schulz buying shares in the open market was in 2014 when the stock was trading around $0.05. Within a year Renoworks hit a high of $0.57. You can see evidence of his buying by clicking here

Insiders own approximately 13 million shares or 36% of the total shares outstanding. This is an area of strength for the company and certainly meets our criteria by having such high levels of insider ownership.

To be sure, following insider buying isn’t always the holy grail for successful stock picking, nor does it always mean the company is going to perform, but we do recognize that insiders only buy for one reason; to make a profit. And many times, they buy early. They likely know what’s coming and know when the business is trending positively ahead of quarterly numbers.

It begs the question, why are they buying and why now?

We believe it has to do with the changing dynamics of the industry. Most notably, an ongoing lawsuit involving a partner of Renoworks, Verisk (Nasdaq:VRSK)/Geomni.

The lawsuit, in which EagleView sued Verisk/Geomni over intellectual property infringement, dates to 2014, when Verisk/Geomni tried to acquire EagleView for US$650 million and failed. EagleView has won every charge laid out in the lawsuit so far, and Verisk/Geomni has been forced to pay US$125 million in damages.

Back in 2018, Renoworks established a partnership and reseller agreement with Verisk/Geomni to advance the home design-to-project delivery process in construction and remodelling markets.

Since then, Renoworks has continued to advance its integration of their proprietary product, FastTrack, into Verisk/Geomni’s dashboard. For those unfamiliar with Renoworks, FastTrack is a mobile-responsive web application that enables roofing and property measurement reports and 3D models for contractors all within a single platform. It helps contractors reduce and eliminate time-consuming home visits by automatically generating accurate measurement reports, True-to-Life (photo realistic) visualizations, and interactive 3D models to estimate projects quicker and win more jobs.

We think this product could disrupt the archaic construction and remodelling industry, and could be a major windfall for the company, or companies that capture this market. Currently, the global remodeling market size was worth over US $3 trillion in 2017 and will witness gains at over 4% from 2018 to 2024.

On October 18th 2019 the US district court of New Jersey ruled in favor of EagleView and placed a permanent injunction on Verisk/Geomni from using the disputed intellectual property. This basically rendered Renoworks’ partnership with Verisk/Geomni useless.

While EagleView isn’t the only data provider in the market, their recent legal win establishes them as the market leader and may even be able to force smaller competitors out of the market. EagleView is becoming the only game in town and it’s constraining Verisk/Geomni to re-think its strategy. It’s also forcing Renoworks to seek new data provider solutions.

The most logical conclusion would be for Renoworks to partner and integrate their software with EagleView. It’s a win-win scenario that would enable Renoworks product offerings to be powered by EagleView’s market leading aerial imagery, and in return EagleView would access new sources of revenue.

We’ve brought this idea to management and based on some of our recent discussions they’ve confirmed that there’s significant interest in their FastTrack product offering from several undisclosed parties.

Are they close to securing a partnership with EagleView?

While this is speculation on our behalf, it could also be the reason why insiders are buying. We will continue to closely monitor for any signals or indications that Renoworks has partnered with EagleView.

In the meantime, shareholders of Renoworks own a high-margin, SAAS (software-as-a-service) business, that is arguably undervalued based on other comparable SAAS businesses. Their leadership in the niche visualization software business is likely worth more to a strategic buyer than the current $9 million market cap. Add in the possibility for a partnership with EagleView and the potential to disrupt the industry and Renoworks seems like one of the better bets in the market. Essentially, shareholders get to own an undervalued business with a free call option that has enormous potential. We currently believe Renoworks is a strong buy up to $0.30.