Return of the Local Supply Chain

Since the onset of COVID-19, the integrity of the modern, global supply chain has come under intense scrutiny.

At first, most understood and tolerated the sudden disappearance of various supermarket items in the face of rapid, forced shutdowns during a once-in-a-century pandemic. But now a backlogged supply chain, surging inflation, a hot job market and intense geopolitical challenges are making both customers and businesses pause.

We shouldn’t be too surprised. Global supply chains have always been balanced on a knife-edge, subject to a dazzling array of factors. Overall, this complex web has worked incredibly well for decades (at least from a cost-savings perspective). If your iPhone was made in the US, after all, you would not be able to afford it.

However, we have been running things so efficiently that, as we now see, the minute the system breaks down nobody knows what to do. And as events over the last couple years have shown, there is a very real risk in having any one nation control too much of a critically important good. Oil and gas from Russia, rare earths from China, microchips from Taiwan—the list goes on.

Whether or not supply chains return to “normal” remains to be seen. But what’s most important is that a change in attitude is now underway and its impact on the smallcap space could be significant.

President Biden has a whole plan dedicated to how his administration could bring back manufacturing and secure critical supply chains. And so far in 2022 the Biden Administration has been increasing its local manufacturing rhetoric.

Canada has also been pushing similar visions for the last couple years. For instance, the latest federal budget proposes $3.8 billion in funding to enhance exploration for critical minerals, including simplifying infrastructure and supply chains.

And it’s not just the US and Canada working to secure supplies and manufacturing of critical items. Many other major economies are doing the same. It’s not only an economic issue, but also now a political issue and maybe even a national security issue. Can Western economies expect to rely on energy and critical commodities from countries like Russia and China anymore?

Either way, we will likely see more political rhetoric on decreasing dependence on foreign-sourced commodities, products and services and increasing dependence on local, critical industries. This also aligns with the ever-growing focus on ESG, seeking to decrease emissions by decreasing transportation time and distance. And as energy costs continue to rise so will the cost of transporting raw materials and finished goods long distances making those items even more expensive.

It’s an emerging trend, likely to stay strong in the years ahead as governments look to shield themselves from many of the supply shocks that have plagued the world these last couple years.

Businesses are already on it

Making stuff local is a winning strategy that is already working for several micro cap companies we follow. And the secret, it seems, is to find a fairly mundane niche.

Take Inventronics (IVX.V). This Canadian company is a custom designer and manufacturer of metal boxes used as casings for utilities. They have been selling these cases for decades, manufacturing them locally, competing with companies locally and in places like China that until recently were able to supply the same product at a significant discount.

When COVID hit, the resulting supply constraints squeezed this market and Inventronics saw its order book blow up. The company first made our Cheapies list in 2019, followed by a highlight in 2020 when it was around 20 cents. It then went on to climb to almost $3 at its peak in 2021, and it remains strong today, recently announcing sales have increased 109% in their latest quarter. They keep getting orders and no wonder, as securing a similar product from overseas is a task that any customer would now pay a premium to avoid. 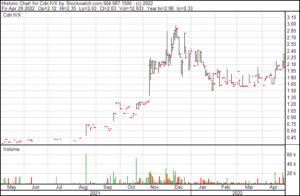 Another interesting one is Tree Island Steel (TSL.TO), a Canadian company that has grown to become one of North America’s largest producers and a global supplier of premium steel wire and wire products. They recently put out strong 2021 financial results, owing to growing demand for their locally made materials.

Both Inventronics and Tree Island are telling of the real play . . .

Simple products being made here at home—that’s the new trade. We are not talking overly complex things, but items like what Inventronics and others are making. Metal casings, nails—the things that would hurt if you dropped them on your foot. The boring businesses that are not valued too highly, but now present good margin expansion with growing sales.

This presents a realistic scenario for “returning” supply chains, and perhaps the baby steps towards something greater. There are a number of these companies we are keeping a close eye on, and we will be detailing these in our members section in the future.

While the local supply chain movement may stay isolated to the smaller, simpler manufacturers, it does represent a sizeable shift in our modern economies. These days, it’s political and economic suicide to not develop critical materials that are in one’s backyard, yet it will remain to be seen how far down the path the local movement goes.

The Economist recently put out a report dispelling notions of a new North American supply chain. They noted that while there will be aspects of the supply chain that permanently repatriate, the global chain will once again reassert itself as its efficiencies become clear. And many local manufacturers are still quite exposed to materials that come from world markets.

However, economics is one thing—political pressures may prove much more persuasive. We think that local manufacturing companies now present considerable upside as whatever price competitiveness issues they may have had in the past are largely outweighed by their local upside. There are a fair number of them out there, many of which are seeing favourable conditions, and we encourage you to put them on your radar.