So far in 2022, we have seen several key themes play out that reaffirm a couple of our focus areas and educated guesses, as well as our overall investment approach.

The turbulent macroeconomic environment has accelerated, with spiking inflation, fears of recession and the spectacular collapse of hype-based investments. The largely beat-down, yet profitable oil and gas industry finds itself in a strange situation facing roaring demand, spiking prices, and labour challenges—all while dealing with mounting risks of recession. Local manufacturing is being sought out as global supply chain woes persist.

And this is all shrouded with enough noise—particularly around inflation—to make even the most hardened, long-term investors want to just buy an index fund and call it a day. While that’s a prudent strategy for most, it’s also good to understand what environment we are facing and what potentially huge opportunities this is creating. To do this, it’s good to get some perspective, starting with an economics refresher.

There is certainly no shortage of inflation stories circulating in the media, and you don’t need to follow the news to know that something is going on. According to the consumer-price index, which measures US household inflation, inflation reached its highest level in more than four decades in May, at almost 9%. 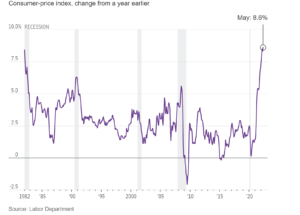 That takes us back to the highs of 1982, but what does this mean? In very general terms, inflation is an increase in the cost of things, often brought on by several factors including increased money supply and, as we are seeing now, supply chain issues. One solution to combat inflation is to increase the value of money by increasing interest rates, which will (theoretically at least) drive prices down.

But hiking interest rates—especially as fast as they are being hiked now—often leads to a recession. This is because tightening the money supply means less cash sloshing around, which means less credit available. One of the first casualties is usually high-risk, high-growth industries and assets. This is followed by growing unemployment and a growing acceptance among the general population that the macroeconomic environment is uncertain and risky. And this expectation, in combination with the reality, creates a feedback loop that leads to a recession.

A recession is currently expected to take place in the third quarter, and the S&P 500 has already dipped its toes into a bear market. But this isn’t a bad thing; recessions and bear markets occur naturally in the business cycle as a way of purging excess credit and malinvestment.

However, we face a unique challenge

Inflation peaked in 1982, around where it is now, and was promptly met with extraordinary tightening from central banks, with interest rates peaking just over 20%. This threw the economy into a deep recession, but it did tame inflation—which then continued to fall, along with rates, all the way until the present day. Now, with rates still near zero, there isn’t much room to cut. So up they go, at least for the short-term.

Nobody is arguing that rates are going back to the blistering early-80s highs. And in fact, all this bluster around rates spiking could just be a strategic way for central banks to stir enough fear into the market to have consumers do the work for them, bringing down inflation by taming speculative behaviour. There’s a good argument to be made that we’re increasing rates just so we have something to cut again in 2023.

The good news: higher rates, combined with time, likely a recession, and changing investment and consumer habits bode well for the future as it all decreases debt and allows economies to become more efficient.

The challenge, of course, is to steer the course and know where to look for value in the current sea of carnage.

Back to the basics

While most stocks are getting caught in the market drops, it’s clear that there is a scramble to find value. We believe this is a perfect opportunity to make sure your overall approach is one that looks for value and doesn’t follow hype, and that you are looking ahead for areas that will benefit in the medium- and long-term.

Our basic investment criteria for smallcaps is more relevant than ever, and should be a basic outline when looking for new investments in this environment, or simply reviewing your current portfolio.

In summary, look for consistent, annual revenue growth. Make sure this is backed by at least two consecutive quarters of profitability. Pay close attention to shares outstanding and don’t be afraid of illiquidity. Also, avoid hot sectors as they often present a crowded trade and often trade on emotions rather than fundamentals.

Oil and gas are in huge demand right now. And it’s not just the big supply shock emanating from Europe, although this is a key factor, but also a lack of investment over the last couple decades that has constrained domestic supply.

Now, we are seeing a common theme play out, where spiking energy prices herald a recession to come. Making it worse, considerable reserves are locked away, due to the hostile investment environment oil has faced. President Biden has even gone so far as to demand more output, which contrasts sharply with his Administration’s rhetoric over reducing fossil fuels.

Politics aside, we are paying for a lack of investment in energy over the last two decades. Domestic oil supply is not something that can easily be increased, due to the capital-intensive nature of the industry, which requires a somewhat stable outlook, yet it underpins the cost of nearly everything in the economy—including food.

These macroeconomics bode well for those who followed our advice to keep an eye on oil and gas services companies, which are having a great year. And many of these companies still have single-digit PE ratios, with strong profit growth.

We’ve already hit one homerun this year in the energy service space. Bri-Chem (BRY.T) has been rapidly growing its revenues and earnings and the stock has exploded higher. 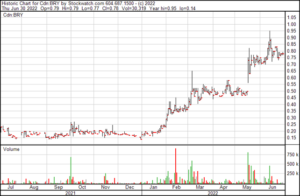 These oil service companies show that not only is energy going to be a key driver in the economy, but that companies who are able to take advantage of finding ways to service this sector or decrease energy costs will greatly benefit.

Along these lines, we believe the current global challenges will accelerate a trend that was already emerging: the return of the local supply chain. Increasingly, companies are taking advantage of local suppliers, who are less impacted by rising energy costs than their overseas counterparts.

Less distance to market and the gradual levelling of overall costs worldwide due to inflation and energy means that making stuff here is starting to make business sense. As we say, making the boring things that hurt when they fall on your foot, close to home, is where the money is at.

We are following this trend closely, and we will be looking at data over the next six months to better understand what opportunities are out there.

Finally, take solace in knowing that most everything is down, and this means there are some good entry points. There is also a lot of creative destruction going on, meaning many unprofitable companies and sectors are being wiped away, making way for better investments going forward.

This presents a great opportunity to not only look at sectors that currently present great value, but also to invest in future trends. For instance, if you think green energy grids are the future look for attractive companies in that space, run them through your criteria and start to build a position. The current investing environment is creating a “buy low” moment for nearly everything, and the best thing you can do is to start acting rather than thinking the next Great Depression is right around the corner.

As we discussed in our previous article on surviving a bear market, think like a long-term buyer. Remove the noise, look for value and don’t get caught up chasing stocks. Everything else will work itself out if you stay the course.