While major Canadian oil and gas companies have enjoyed an overall robust stock price recovery since the COVID lows of 2020, ample investment opportunity remains if you look in the right places.

In fact, once the dust settles and the world works its way through the current market volatility, it will become increasingly apparent that a certain segment of the oil and gas market presents considerable upside.

As always, once this opportunity is known the chances for significant gains may be too late. So if you missed the recent oil run and want another stab at what may be a hot sector for 2022, there are several factors to understand . . .

A rotation is underway

Interest rates are going up.

By how much remains to be seen, of course, but there’s no denying that the tightening cycle is upon us. The markets have been predictable in their response as they price this in, pulling the rug from under high-flying, overvalued tech stocks and sending the NASDAQ into correction territory.

The resulting fear and uncertainty has hit nearly every market segment, as the era of cheap money propping up speculation appears to be coming to an end.

But while this is hardly the end of speculation, it’s likely the reemergence of value as the preferred market play. Cash is king in a rising rate environment and those who don’t make any will soon find themselves at a growth disadvantage.

This means companies with strong business fundamentals and solid revenue are getting the spotlight in the emerging, more conservative era. Imagine that.

And one sector in particular is looking very strong.

Despite headlines dominated by tech stocks, 2021 actually belonged to energy. With a 50% rebound in oil prices, energy went on to be the best sector in the S&P 500 Index and S&P/TSX last year.

To be fair, fundamentals went out the window for most of the market, and oil was no exception—snapping back from a ridiculous low that even saw West Texas Intermediate (WTI) price go negative (albeit very briefly) for the first time.

But the medium- and long-term reasons are economic recovery and simple supply and demand. Global population growth and increasing standards of living, combined with the current lack of oil alternatives, suggest that demand will be strong for some time.

The Canadian Association of Petroleum Producers echoes this, noting that investment in Canada’s oil and gas industry will rise 22% this year amid higher prices.

The International Energy Agency (IEA) also says oil demand will continue at around 100 million barrels per day for the next several years and remain at or above that level until 2040 and beyond.

And there’s also the factor of undersupply. Rumours of dwindling supply from OPEC and Russia have to be considered. So does increased ESG requirements, which include regulatory hurdles that prevent new projects from coming online.

Eric Nuttall, manager of the $1 billion Ninepoint Energy Fund, believes the factors above mean that the recent success in energy will bring in more fund managers, as Canada’s energy producers use free cash flows from high prices to boost their values.

This, in turn, will lead to increased interest, first among institutions, and then retail as it becomes clear that oil is in a multi-year bull market.

In other words, FOMO may be about to run its course.

Money is pouring into oil

The energy sector is flush with cash and more is on the way, with revenues expected to reach record levels this year if prices remain elevated, according to ARC Energy Research Institute.

All that cash has to go somewhere, and for energy companies it often equates to paying down debt, share buybacks and dividends. However, what’s different about this oil and gas boom, is how the battle scars from the last bust have impacted companies willingness to increase their exploration spend – and past investors continue to demand for their investment back.

But, as several Oil & Gas producers continue to generate strong cashflows, adding in the cushion of safety with the current oil price, many of these producers have drastically improved their balance sheets, some are as strong as ever. We believe it’s inevitable before several of these companies start re-thinking the opportunity and begin increasing their exploration and development budgets – especially if oil prices rise.

So an investor could do worse than just placing money in the big players. However, all that cash and increased investment will also flow downstream to where the real opportunity lies.

Retail investors largely missed the boat in 2021, shunning a sector that seemed dead while institutional investors stepped in to make considerable gains. But they mostly stuck to large- and medium-sized players.

As Nuttall points out, many smaller Canadian oil companies trade at an average enterprise value to cashflow multiple of only 2.9 times, compared to a historical level of seven to nine times. He also went on to say that, “with oil stocks currently discounting US$60 WTI and able to privatize themselves with just 4.5 years of free cash flow at US$80 WTI, we look for meaningful capital returns in the form of buybacks and dividends to this year awaken generalist investors from their catatonic state and begin to recognize the generational opportunity (still) in energy stocks”

There is simply a massive disconnect between the ongoing energy rally and the many small cap players that service the larger companies.

Here is what some of the larger oil and gas service company charts have looked like since just before the pandemic. 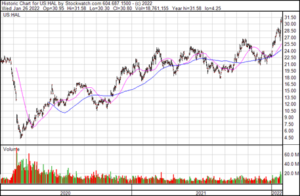 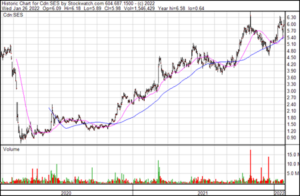 While the larger oil and gas service company charts look great, they have significantly underperformed the oil and gas producers.

Oil companies are awash in cash. They’ve been paying down debt, bought back billions of dollars in shares, and are starting to increase their capital expenditures. Drilling activity is increasing and the service companies stand to benefit greatly.

The investment community has taken notice of the improving fundamentals and outlook for the larger service companies, but have they done the same for the smaller players?

As is common in a new bull move for a sector, the big players move first and the smaller players tend to move later, and when they move they can move a lot.

Many of the currently small oil and gas service companies were once much larger. Some are down 90%+ from the last bull cycle and can now be classified as nanocaps. Nanocaps that are too small for institutional money to buy. We believe this is the big opportunity for smaller investors.

And, if you’re a long-term investor and you think that oil has already moved too much, here’s what it looks like over the last 10x years.

Other than Bri-Chem Corp (TSX: BRY), here are a few nanocap examples, that we believe could benefit by the continued increase in oil and gas company spending….

About: Enterprise Group, Inc is a consolidator of services-including specialized equipment rental to the energy/resource sector. The Company works with particular emphasis on systems and technologies that mitigate, reduce or eliminate CO2 and Greenhouse Gas emissions for itself and clients. The Company is well known to local Tier One and international resource companies with operations in Western Canada.

About: Zedcor Inc. is a Canadian public corporation and parent company to Zedcor Security Solutions Corp. Driven by our guiding principles of being pioneers, innovators and honest, Zedcor is engaged in providing technology based security & surveillance services in Western and Central Canada. The Company is disrupting the security industry with its three main service offerings to customers across all market segments: 1) rental, service and remote monitoring of its proprietary MobileyeZ security towers; 2) live monitoring of fixed site locations; and 3) security personnel.

About: CWC Energy Services Corp. is a premier contract drilling and well servicing company operating in Canada and the United States with a complementary suite of oilfield services including drilling rigs and service rigs. The Company’s corporate office is located in Calgary, Alberta with operational locations in Nisku, Grande Prairie, Slave Lake, Sylvan Lake, Drayton Valley, Lloydminster, Provost and Brooks, Alberta and U.S. offices in Denver, Colorado and Casper, Wyoming.

About: Headquartered in Calgary, Alberta, Divergent provides fluids management products and services for the water, gas and oil industries through its wholly owned subsidiary Extreme Pump Solutions LLC. Product lines including Electric Submersible Pumps and the future development of an Electromagnetic Pump technology.

With strong fundamentals in place and a shifting market landscape that is leaning towards value, 2022 may very well see a wave of investment flow into the energy space. This investment will follow a common bull pattern, bringing increasing amounts of institutional money into large companies and cascading down to the smaller players, with retail in pursuit.

There are still several risks at play, including additional COVID variants and larger than expected oil output increases, but these are largely muted by the capital flows currently underway into energy and the short- and medium-term demand.

And from a small cap perspective, there are some compelling companies (several of which we noted above) whose strong financials and growing business could translate to outsized gains as the year progresses.