by Paul and Brandon 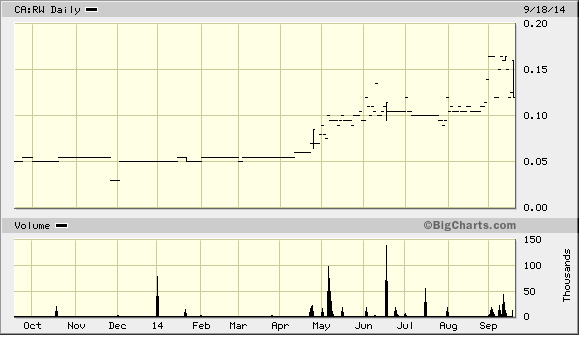 Deciding to remodel a home is a big commitment. Costs often run in the tens of thousands and modifications aren’t easy once work has begun. Because of this, homeowners often become anxious and delay or abandon the project . This is where Renoworks come in.

Renoworks sells digital visualization software that allows users to virtually preview products on a rendering of their home. Users upload pictures of their home into the software and can then experiment with different windows, siding, and doors as they plan out the remodeling. They become engaged in the remodeling process and can turn blueprints/graphics into visions of their dream home.

Suppliers of remodeling materials, like Andersen Windows & Doors, use Renoworks’ solution to drive brand loyalty. The homeowner loads his/her home into the software and explores the possibilities with the manufacturer’s products.

Customers experience brand engagement that pays off for the manufacturer when it comes time to buy. Renoworks’ clients have found homeowners are 5X more likely to request a quote when engaged through the software – results like these are moving this product from a “nice-to-have” to an essential marketing tool.

Homebuilders and remodelers use the software as a way to showcase their capabilities to clients. Clients play a more active role in the design process and are more satisfied with the end result. The software also gives the builder a platform for increasing the scope of the design and other upsells.

Renoworks’ begins by working with product vendors to build digital images of their products. These images power a customized solution that is then delivered on a website, a customer-branded app, or a desktop application.

The digital visualization software industry is in its infancy and there are very few independent players. The company sites only three competitors, one in the U.S. and two abroad. Renoworks competes primarily with U.S.-based Chameleon Power (privately owned).
Renoworks generates the majority of their revenues from manufacturers. The housing material manufacturer segment consists primarily of regional players. There are nearly 5,000 manufacturers in North America, with masonry and flooring comprising over half this total.
Renowork’s industry depends on the health of the broad economy and the housing sector. Renoworks software is also not “mission critical” and industry adoption of the technology is low. Fortunately, we see two key trends that should change this:

Strong home sales and a low interest rate environment have kept remodeling activity buoyant. According to the National Association of Homebuilders, remodeling activity is at its highest point since 2006, up over 100% from the 2008 lows. When remodelers are flush with cash, they are more likely to commit to discretionary purchases like software.

Following an initial wave of consumer adoption of the iPad and other tablets, many businesses are now beginning to use them. Since remodelers must travel to the home for consultations, a tablet loaded with Renoworks’ mobile software makes for an ideal selling tool.

Renoworks’ opportunity for growth lies beyond their traditional manufacturer market in the homebuilder and remodeler segments. The builder market is concentrated with larger accounts while the remodeler segment is highly fragmented. The remodeler market alone consists of nearly 400K businesses throughout North America, representing a massive untapped market.

It will take time to reach this wide segment, but the payoff could be large. Capturing just 1% of this market would bring nearly $5M of recurring revenues (assuming
$100/mo subscriptions) to Renoworks – not bad for a company doing $2M in
revenues currently!

Renoworks has been adding customers rapidly over the past few years and it has shown in the numbers:

Revenues grew 34% in 2013 and 16% over the trailing twelve months while operating income hit record levels for the company. While this growth is impressive, the financials don’t tell the full story.

Over the past year, Renoworks began transitioning from on-premise to cloud delivery, trading in up-front licenses for recurring monthly revenues. We find it impressive the company delivered double-digit growth while sacrificing up-front license revenues.

Here are the company’s results broken down by quarter :

Renoworks sells their software through annual licenses on a per-user basis with one-time implementation fees when the software is deployed . As the company has grown, so have their recurring revenues (now ~65% of total revenues). This recurring business gives Renoworks visibility and a solid base of revenues to use for growth investments. We expect the portion of recurring revenues to incre ase as the company sells monthly subscriptions under a Software-as-a-Service (SaaS) model.

Renoworks has delivered double-digit growth in 5 of the last 8 quarters and gross margins have soared to over 90%. The business currently depends on large contracts with key clients so quarterly results can be lumpy. We anticipate that as the company grows their SaaS business with smaller contracts to a larger number of remodelers, results will smooth and sequential growth will accelerate.

Below is a summary of the company’s capital structure and current valuation : 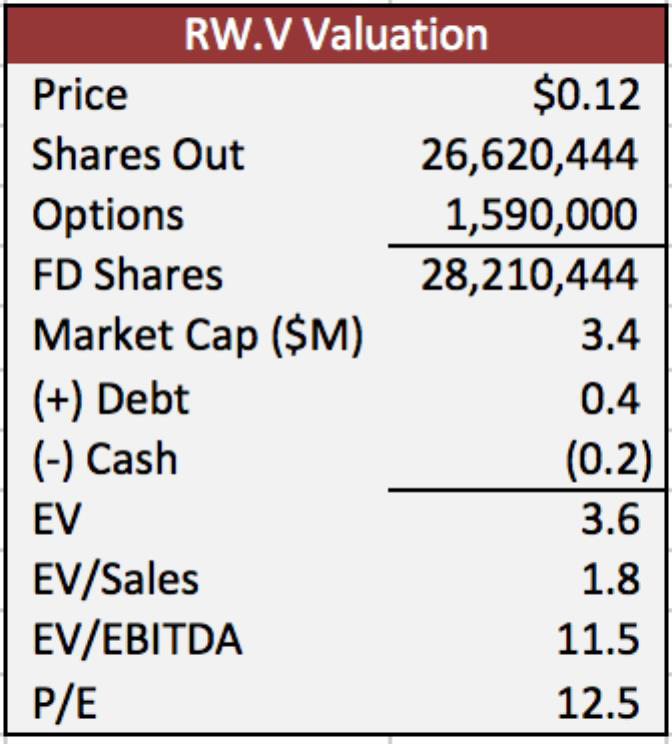 Renoworks boasts a clean capital structure with only a small number of options outstanding. Shares are currently valued at 1.8X sales and 12.5X earnings – a modest valuation for a company that grew double-digits y/y. Given the company’s recent performance and long runway for future growth, we feel Renoworks should trade at a multiple more apt for early-stage technology companies.

Renoworks trades at less than half the peer revenue multiple – and most of their peers aren’t even profitable yet! Applying the peer group revenue multiple gives us a price target $.25, offering over 100% upside from current levels. This valuation implies a P/E ratio of 25X, again hardly a stretch for a company with Renoworks’ growth profile.

To justify our valuation, we must ask, can Renoworks continue its double -digit growth rate? When we think about the limited competition, large untapped market, and attractive business model, we feel they can.

Here are the key risks we see with an investment in Renoworks:

 Renoworks software is not “mission critical” and awareness of the product is low. Great time and resources must be spent educating customers of the software’s benefits.
 Penetrating the remodeling market will mean selling the software to a much larger base of customers. Renoworks will likely have to upgr ade their infrastructure to target this fragmented market.
 Revenues can be lumpy quarter to quarter. The company just became profitable and a weak quarter can quickly become loss-making.
 The company is resource-constrained and has little capital to invest in growth.

Renoworks was founded in 2002 by Greg Martineau, an industry veteran with 30 years of home remodeling experience. Greg became Chairman and hired longtime friend Doug Vickerson as CEO in 2008. Doug was previously Vice Pre sident of Selling and Marketing at Guest-Tek Interactive and leads the sales efforts at Renoworks as CEO.

Rounding out the board are Nairn Nerland and Bob Schultz. Nairn Nerland is technology veteran who served on the executive team alongside Bill Gates at the
Corbis Corporation. Bob Schultz is a renowned business professor at the University of Calgary and claims Greg, Doug, and Nairn all as former students.
Renoworks is tightly held, with insiders owning 53% of the shares outstanding. Nairn holds the largest stake at 20%. Greg owns 13% and and Doug owns 9%.

We have been impressed with management’s accomplishments thus far. They take modest salaries, built positions in the company with their own money, and have grown the business from scratch with minimal dilution to shareholders.

Renoworks has nearly everything we look for in a stock – high insider ownership, excellent growth prospects, a compelling valuation, and an attractive business model. The company is a market leader in a niche industry that we feel is at the early innings of widespread adoption . Renoworks remains virtually unknown by the market and we see significant upside as the company’s growth story gets out to a larger audience of investors.